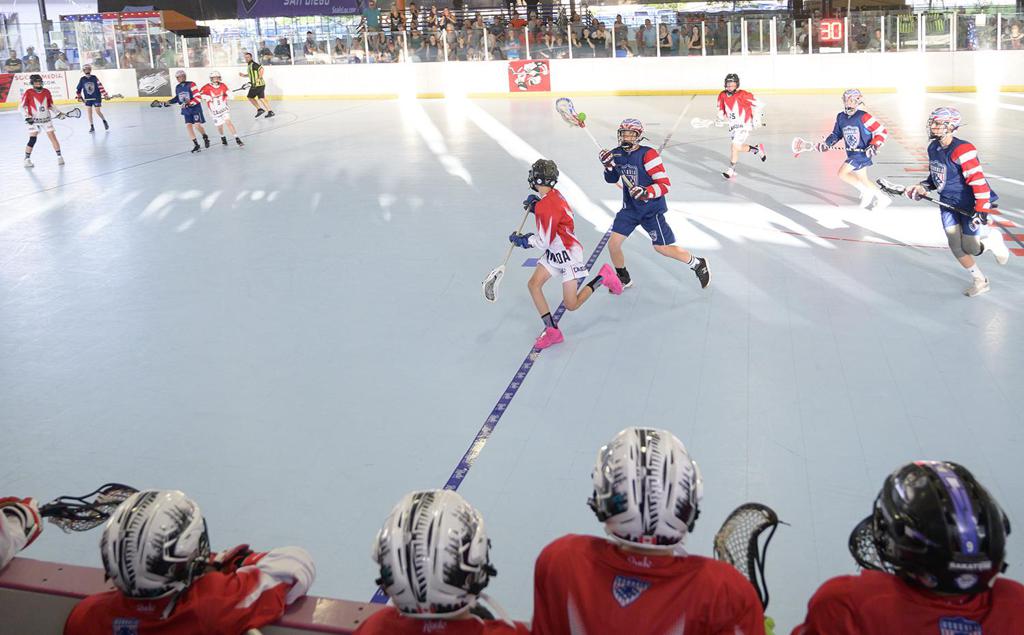 The USBOXLA Nationals featured its version of international competition this weekend at the country's largest youth box lacrosse tournament. Billed as a "more intense format for its All-Star games," the USA-CANADA series was as advertised.

In the Pee Wee contest, the atmosphere at the main pad at The Rinks Irvine had a world championship feeling as Canada edged Team USBOXLA 7-6.

"There is always a lot on the line when the United States plays Canada. That is especially true in the sport of box lacrosse," said Team USBOXLA coach Shaydon Santos. "In the Pee Wee game, you couldn't have asked for a more exciting game. It came right down to the final second."

In a contest that featured three lead changes in the third period, it was Canada's Austin Vanichuk who assumed the role of hero. The Langley, BC, native tied the game with one minute to play and converted a crease dive with 13 seconds left to give Canada a late one-goal lead.

"It was really exciting," said Vanichuk about netting his second goal in 47 seconds. "We just kept the positivity up [on the bench]."

Canada fell behind 3-1 after one and never led until 2:45 of the third period. The Canadians used a 3-0 run to jump in front to take a 5-4 lead. Team USBOXLA, however, regrouped and got markers from Isaac Ryan and Carter Harris to retake the advantage at 6-5. Harris' diving goal from behind the cage came with just 2:18 to play. That set the stage for Vanichuk's late-game heroics.

"Austin is a fantastic player, and he is out there in situations where you can count on him to come through," said Canadian coach Jason Goller.

Team USBOXLA controlled the opening 15 minutes of the game as Colton Pawlak scored three times to stake his team to a 3-1 advantage. On all three of his tallies, the 12-year-old forward showcased his speed and a deft touch around the goal.

"He is one of the best Pee Wee players that I have ever seen, north or south of the border," said Santos.

In the second period, it was Canada's turn to unleash its offense as the kids from British Columbia outscored the Americans 3-1 to tie the contest at four. Cody Todd netted a pair of goals for Canada and Kayden McIntosh added one, while goalie Caleb Khan limited the Team USBOXLA to a single tally.

"He's the goalie for our Pee Wee team back in Langley, and we went to Provincials with him," said Goller. "He's a stellar goalie who lets the team in front of him play with a lot of confidence."

The Canadian All-Star teams were selected from a pool of its country’s players competing in the USBOXLA Nationals. The talent pool on the Pee Wee side featured kids mainly from Langley and Maple Ridge and some from Coquitlam.

“We enjoy coming down here,” said Goller. “Watching the progression of the game is fantastic for lacrosse on both sides of the border and for both the box and field game. We like coming here to be able to showcase the talent in the region and also to see how USBOXLA is changing the box game in the US.”

The best kids from the United States competed under the USBOXLA banner. Kids on the team hailed from 11 states throughout the US, including Arizona, California, Utah, Georgia and Kentucky. For Denver native Colton Pawlak, the USBOXLA Nationals has been an incredible experience.

"It's awesome," he said. "It's a really fun experience. It's just a great group of boys to play with."