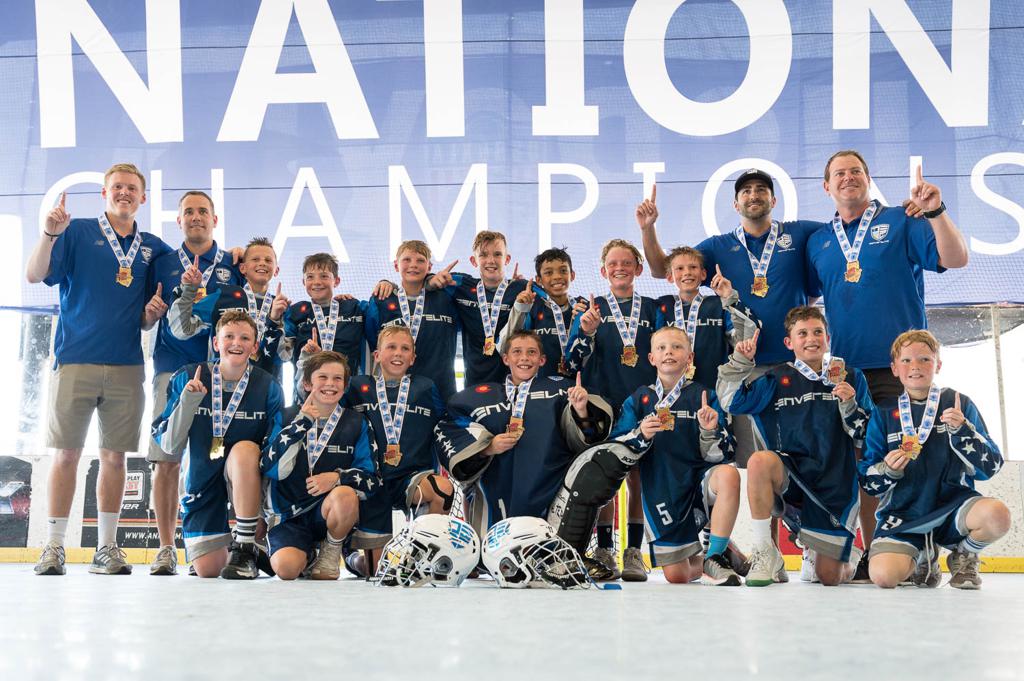 An incredible weekend of box lacrosse ended with the crowning of 11 champions across five age groups on Sunday at The Rinks Irvine. The presentation of the hardware wrapped up box lacrosse’s ultimate showcase.

“I’d like to thank the 1,700 athletes, 100 teams, coaches, managers, referees and families for coming together and proving that this game’s best days are just ahead,” said USBOXLA co-founder Shaydon Santos. “Congratulations to all our medal winners, especially the Rivermen on their historic NCBS National Championship.”

This year’s USBOXLA Nationals was the biggest to date, featuring over 100 teams and more than 1,700 players at The Rinks in both Huntington Beach and Irvine, Calif. A new wrinkle was the National Collegiate Box Series National Championship, which saw the Ohio champs, the Rivermen, edge the Colorado champion Fighting Bison in a decisive 15-minute tiebreaker game to win the inaugural title. The Team USBOXLA-Canada All-Star games also added to the intensity as the two countries competed at the Pee Wee, Bantam and Midget levels.

On Sunday, however, it was all about the club teams and their quests for gold. In the morning Novice Division showdown, undefeated Team Superstar from Ridgefield, Conn. received the first gold medal of the day as they held off a late charge from the West Coast Voodoo (Langley, BC) to earn a 13-11 victory.

Team Superstar coach Roy Colsey, who played nine seasons in the National Lacrosse League, celebrated with his kids after the game, including his 10-year-old son Christopher. The trip to California for his youngest group will only help strengthen Team Superstar’s already elite program.

“With that group of kids, I think it’s like learning a language,” said Roy Colsey. “The younger you start to teach them box lacrosse, the faster they are picking it up.”

In the gold meal game, the team from Colorado edged its Canadian counterparts once again, capturing an 8-7 win. Team USBOXLA forward Colton Pawlak scored the winner with 2:02 to play off a crease dive. Goalie Robby Mielke preserved the win with a point-blank save with just four seconds to play. With the championship victory, the Denver Elite Pee Wee team won all three tournaments they played in this summer.

“It was a really exciting game,” said USBOXLA Co-founder and Denver Elite coach Matt Brown. “It’s the second time we played them throughout the weekend. We played them at the novice level last year back at this tournament, and they got us pretty good. In yesterday’s round-robin game, we got lucky. A couple of bounces went our way.

“I knew today was going to be a challenge and credit to our guys, we just battled for 45 hard minutes and stayed the course. I was really proud of them. They got down at one point but didn’t drop their heads. They just kept making the next play, and that’s what great teams do.”

The Denver Elite program sent teams to four gold medal games, with its Pee Wee A and Midget A teams winning championships. Denver took home silver medals at the Bantam A and High School Elite levels.

“As a program, we performed our best,” said Brown. “Credit goes to John Gallant, Jamie Shewchuk and Erik Adamson and all our young coaches. They did a fantastic job. John worked with these guys all summer. He was the mainstay and just got our guys ready. From the first practice to this last tournament, we made huge strides forward. 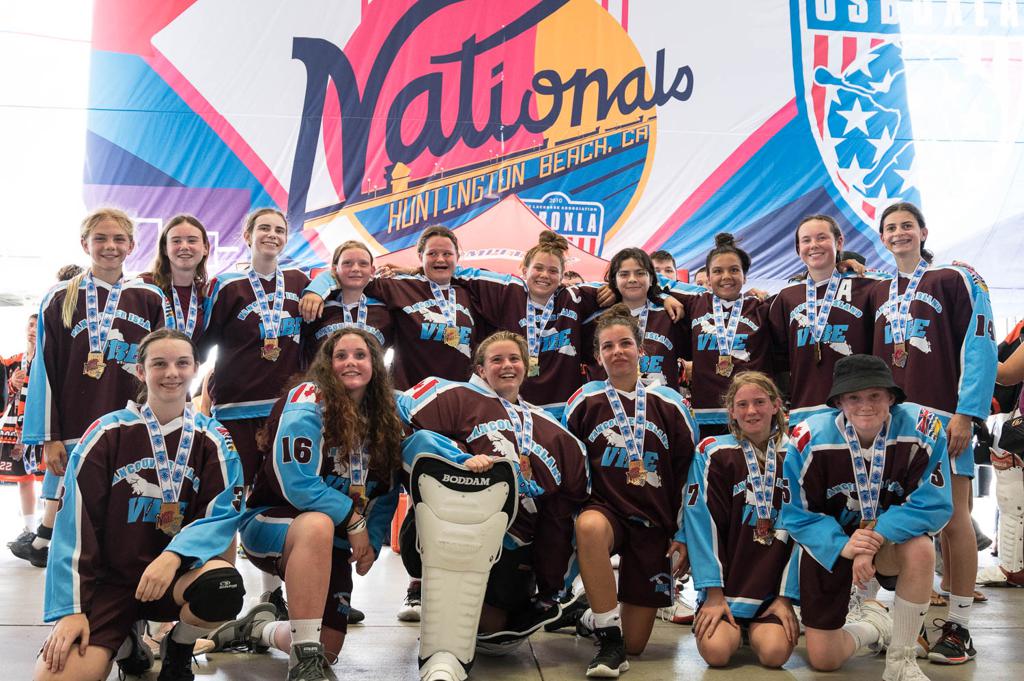 In the Bantam Boys Division, three championships were decided on Sunday. In the A Division, the West Coast Woodsmen (Langley, BC) held off a comeback bid by Denver Elite to win 8-7. True Illinois captured the B Division, while True Utah was victorious at the C level.

Denver Elite was back in the title hunt in the Midget A Division after finishing the round-robin play with a 4-0 record. In the championship game, Denver Elite defeated Minnesota Stars Black, 6-4. The program from Minnesota did, however, leave with one gold medal as its Pee Wee team won the Pee Wee B title.

In the Midget B Division, the Atlanta Revolution knocked off the Medicine Hat Sundevils, 9-7, to finish the tournament with an unbeaten 5-0 record.

In the High School Elite gold medal game, Denver Elite battled O2 Northeast Elite in one of the most thrilling games of the tournament. The Northeast Elite team, made up mostly of kids from Onondaga Nation and Syracuse, NY; rallied to stun Denver Elite 9-8 in overtime.

In the championship game, Northeast Elite scored three goals in the third period, with the final marker coming with 20 seconds left, to tie the game at eight and force a five-minute sudden-death overtime. That’s when Jonathan Pierce unloaded a side-armed rocket for the winner with 1:30 to play, completing an incredible comeback.

“This is amazing. We didn’t even think we were even coming here. [At one point], we only had 10 guys,” he said. “Now look at us, we are winning gold out here in overtime. I loved it.”

On the adjacent rink, the girls’ bronze medal game was packed with equally as much drama. The Cali*Lax All-Stars used a goal from Taylor Santos with three minutes to play to knock off Team Superstar 4-3.

The all-star coaching staff watched as its team rallied with the contest’s last three goals to finish the tournament with a medal and a 3-2 record.

“This is the first weekend they have actually won games. That’s what makes this so incredible,” said Evans. “They have come so far. To end on a high note was awesome, especially with their first three wins.”

Evans spent the weekend coaching boys’ and girls’ teams at USBOXLA Nationals. On Saturday, she joined her cousins Shawn and Turner Evans, who play for the NLL’s Rochester Knighthawks, on the bench for the Pee Wee Huntington Beach Box Lacrosse Club boys team. For the Peterborough, Ontario, native, coaching box lacrosse allowed her to get back to her Canadian roots.

“I truly love box lacrosse. I wish I could still play it,” said Erica Evans. “Just being able to help out with these girls out here and experience everything is awesome. I am glad to be back [in box lacrosse], and hopefully, I can continue to do that in the future.”

This year, USBOXLA Nationals featured five girls teams at the Bantam age group and three at the Midget level. The Denver Pride captured the Midget Division crown while finishing second behind the Vancouver Island Vibe at the Bantam level. Evans, who grew up playing box lacrosse, encouraged more girls to try the box game.

“I think all the girls can learn a lot from it, especially if they want to progress in the field game,” she said. “I think I learned a lot from that. I think just getting the word out there [will help attract more players], and this is a great way to do it.”