I-90 Cup: Youth teams secure their place in storied rivalry 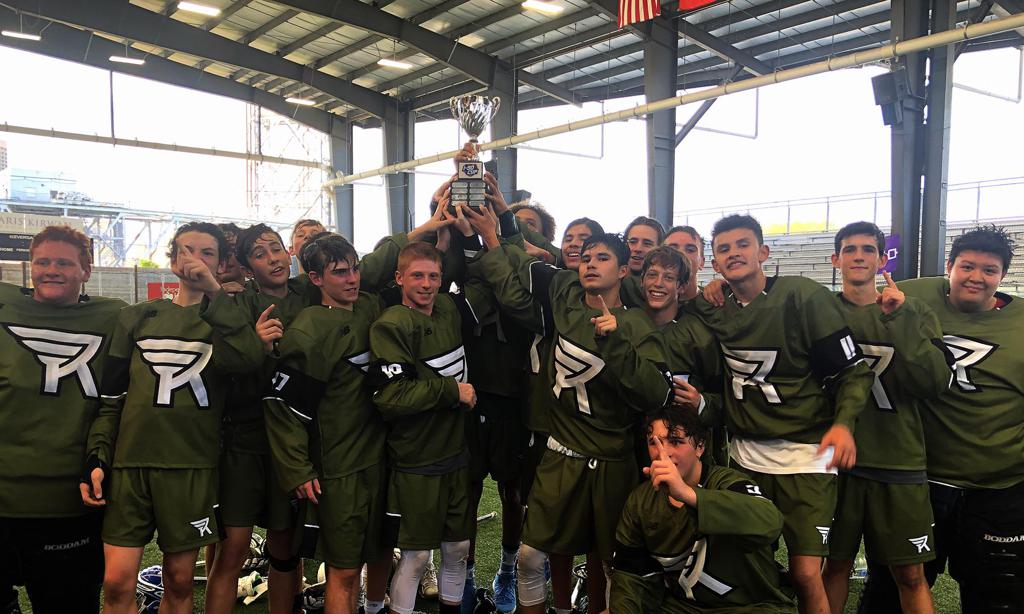 The thruway lacrosse rivalry between Buffalo and Rochester is alive and well.

On Sunday, the oldest rivalry in the National Lacrosse League featured three dramatic finishes in the USBOXLA-sanctioned I-90 Cup, as the new-look Jr. Knighthawks defeated the Jr. Bandits to win championships at the Pee Wee, Bantam and Midget levels.

"Judging by the product on the floor, you could tell these teams wanted to win this thing," said Jr. Knighthawks coach Brad Gillies, who experienced the rivalry firsthand as a player with the Knighthawks the past four seasons. "It was the first year of the series, but you could still see the effort was really high. It was pretty cool to see that rivalry happen at the youth ages."

Gillies came up with the idea for the series to prepare both clubs for the Jr. NLL Tournament, which will take place Friday through Sunday in Oakville, Ontario. The Jr. Bandits and Jr. Knighthawks will join fellow USBOXLA programs, the Jr. Mammoth and Jr. Seals, at the NLL's premier youth lacrosse event. The annual tournament includes junior teams from 11 of the league’s 13 teams.

Last Sunday, the Buffalo Bandits hosted the I-90 Cup, which featured over one hundred players at RiverWorks in downtown Buffalo.

"You couldn't have asked for a better tournament," said Bandits Coordinator of Lacrosse Operations Dan Ristine. "It's a great transition for us going into the Jr. NLL. It's good to get the guys experience. A lot of people came in, and the parents and coaches were pleased."

"It's awesome," said Smith. "When I heard the news that we were going to do this, I thought it was pretty cool."

"It was a lot of fun. I was taken aback by the turnout," said Brown. "There was a lot of good lacrosse played between Buffalo and Rochester. For this event, I think this venue was perfect to put that on display."

For Jr. Bantam player Dylan Cordingley, the rivalry is very much a part of his life. His father, Ted, is the longtime equipment manager for the Bandits and his uncle Troy is currently the team's assistant general manager/director of scouting. Dylan was also joined on the Bantam team by his cousin Cade, who finished the series with four goals and one assist.

"It's a lot of fun getting to play in front of NLL stars," said Dylan Cordingley, who was also coached by his dad on Sunday.

The Jr. Bandits hit the floor sporting 1992 throwback jerseys, while the Jr. Knighthawks made history by wearing the new green and black uniforms for the first time in competition.

"It's pretty sweet that we get to play in them before they do," said Jr. Knighthawks Bantam star Luke McNamara, who led his team with four goals and seven points. "They are awesome colors, and I really like them."

The I-90 Cup was packed with the drama that has epitomized the Rochester-Buffalo series. The first two age groups needed decisive mini-games to determine the winner, while the Midget Division was decided in a shootout.

The Jr. Bandits opened the tournament with back-to-back wins, earning 9-5 and 12-10 victories, respectively. The Jr. Knighthawks Midget team's 11-7 win, however, reversed the fortunes of the teams from the Flower City. Their victory was the first of six straight for Rochester.

"You couldn't have asked for a better finish," said Gillies. "We didn't start off the best. We had to force two mini-games, but we battled through that adversity. Forcing those mini-games says a lot about our teams."

The Pee Wee Division was the first to go the distance, as the Jr. Knighthawks rallied from a 10-7 deficit in Game Two by scoring the game's final four goals to even the series at one win apiece. James Holbrough netted the game-winner with 21 seconds left to force a 10-minute mini-game.

"I was very excited," said Gillies. "It gave a lot of confidence to them to know that they could do that when they put it all together. They can play with those teams. A lot of teams would have packed it in being down by four goals, but they decided to chip away at it and came out with the win."

In the mini-game, the fifth and sixth graders representing Rochester stormed out into the lead and never looked back in a 3-1 victory. Brodie Joyce, Darris Jones and Brayden Stearns all collected goals in the decisive game. Owen Pawlowski scored the lone goal for the Jr. Bandits.

The win was sweeter for the Holbrough family as James’ dad, Cory, was a member of the coaching staff.

"It was great," said James Holbrough after raising the Cup. "It was just an amazing feeling."

The Jr. Knighthawks also extended the series at the Bantam level as they won 12-5 in Game Two to force a mini-game. McNamara led the way with two goals and two assists, while Luke McCrobie collected one goal and two assists. Taylor Jungermann and Braxton Jones split time in goal, as they allowed just two and three goals, respectively.

In the tiebreaker contest, the Jr. Knighthawks edged the Jr. Bandits 2-1 as forward Liam Wheeler picked off a clearing pass and scored the winner with 3:07 to play. The Jr. Bandits had evened the game on a tally from Dylan Cordingley with under five minutes remaining. To open the 10-minute game, Rochester struck first with a goal three minutes in from Cody Johnson off a great inside pass from Joe Green.

"It was amazing," said Wheeler. "We aren't really a morning team, but we came out (in Game Two and the mini-game), and we were ready to win."

In the nightcap, Will Dempsey stopped six of seven Jr. Bandits to help the Jr. Knighthawks earn a 7-6 shootout win. Before sliding to his right to take away the far corner, Dempsey checked to see if one more stop would finally end the marathon shootout.

"I asked the referee, 'If I stop this one, do we win?' said the Jr. Knighthawks goalie. "He said, 'Yep.' That was the biggest pressure, knowing the game, win or lose, comes down to one person. It was intense, but looking back at it now, I couldn't have been happier about it."

Dempsey and Kyle Meagher combined to go 2-0 in the tournament. Dempsey also scored his first career goal in the Game One win, as his outlet pass to Jon Pierce bounced off the Jr. Bandits' goalie and into the net.

Similar to the Pee Wee and Bantam teams, it took a Jr. Knighthawks' rally to secure the win at the Midget level. Rochester forced the shootout by outscoring the Jr. Bandits 2-0 in the third period. The Jr. Knighthawks broke through for a pair of goals to tie the game at six.

Christian LeFeurve connected on a low shot at 4:27 and Kahtehiyo Smith scored on the power play with just 3:34 to play. Jr. Bandits' goalie Trystan Williams kept the game deadlocked as he made several point-blank saves in the closing minutes.

In the shootout, Williams and Dempsey allowed just one goal to the first six shooters. Rochester extended the extra frame when LeFeurve scored on the Jr. Knighthawks' third and final shot. In the sudden-death portion of the shootout, it took a marker from Gabe Edwards, and a save by Dempsey to send the Midget team to an I-90 title.

"I was worried, and a little nervous, but I put it top left and dangled a little bit," said Edwards, who had full confidence that Dempsey would preserve the win. “I knew he had the save. He is one of the best goalies.”

In Game Two, Buffalo came out hungry to force the mini-game as it never trailed after the first period. The Jr. Bandits took their first lead on the strength of a 2-0 run early in the second as Garret Walker and Braley Abrams netted back-to-back goals to give Buffalo a 3-2 lead.

The Jr. Bandits increased their lead to 6-4 by outscoring the Jr. Knighthawks 3-1 to end the second period, as Jake Echeveria, Jayden Korte and Eoin MacKay all found the net. But Sunday would belong to the Jr. Knighthawks as they erased three two-goal deficits.

The ending of the I-90 Cup set the stage for the future success of the event.

"I wish we had this when we were kids," said Brown, who grew up playing lacrosse in nearby Salamanca. "Playing at this venue draws attention to it and creates a lot of buzz for the I-90 Cup."

"We hope to build off this," said Ristine. "We have a lot of field kids who play on our teams, and I know that college coaches emphasize box lacrosse. We are hoping that kids not only want to become a part of this but our winter league as well."