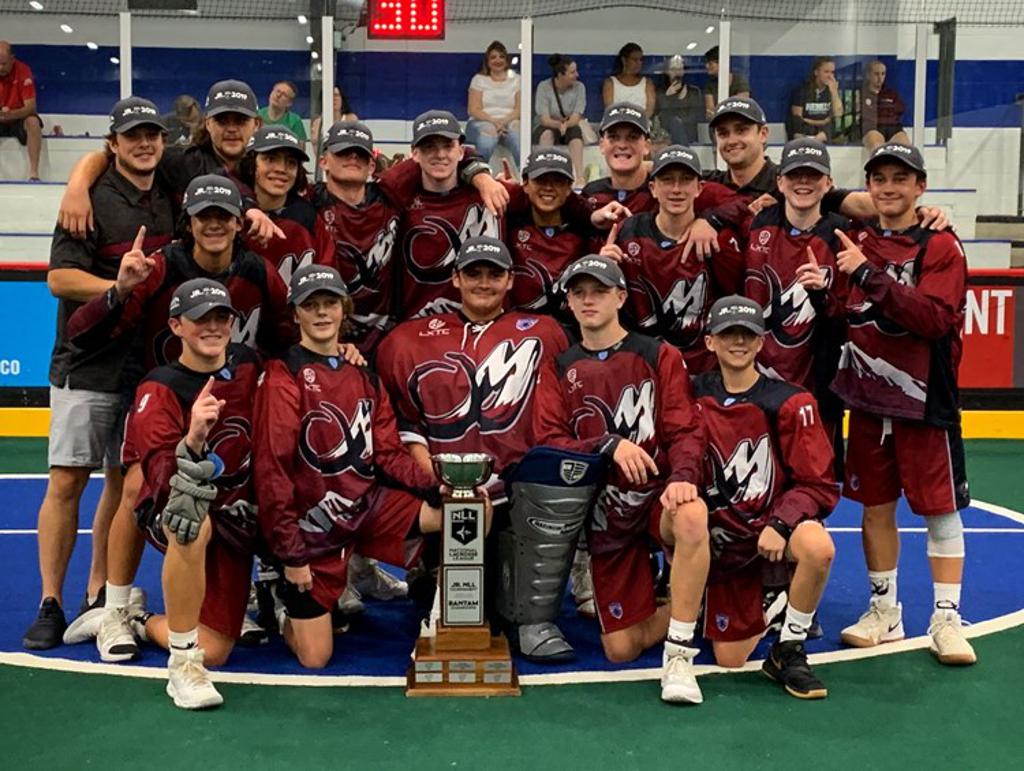 As the Jr. Mammoth players huddled around the two-foot-high wooden and silver trophy for a team photo, the image served as a snapshot of the success achieved by USBOXLA teams at the Jr. NLL Tournament.

At the seventh annual event, held in Oakville, Ontario from Aug. 23-25, USBOXLA clubs proved to be among the elite competition at the tournament. That was evident at playoff time when six of the 12 berths were secured by USBOXLA-affiliated clubs.

The Jr. Mammoth earned the best results, capturing the Bantam Division championship. Colorado advanced to the title game after edging the Jr. Knighthawks 9-8 in overtime. The Jr. Seals also won in OT, defeating the Jr. Rock 5-4, to set up an all-USBOXLA Finals. The junior team of the San Diego Seals entered the postseason after winning the Blue Division with a 5-0 record.

Jr. Mammoth player Alexander Fredrich, who posted 27 points, was named Bantam Division MVP, earning the Tucker Williams award. Mason Shull stopped 23 shots to earn the win. Throughout the tournament, he shared time with Emma Mielke, who was one of a few girls to play in the Jr. NLL. After the winning the Jr. NLL Cup, Mielke encouraged more girls to play box lacrosse.

"Step up and just be confident," she said. "Trust your girls. Make friends with them because then they'll know they can trust you. Have fun with it. [Box lacrosse] is a great experience."

With two of its three teams playing on Sunday, it was also one of the most successful tournaments ever for the Jr. Knighthawks. The Pee Wee team advanced to the Finals, while the Bantam team dropped a 9-8 overtime decision to the Jr. Mammoth in the semifinals.

"I was thrilled with how competitive all three of our teams were this weekend," said Jr. Knighthawks coach Brad Gillies. "In my four years helping to run this program, this was our best yet. It's rewarding to see the development these kids are having with the box game, and it brings a lot of excitement for what the future holds for box in Rochester." 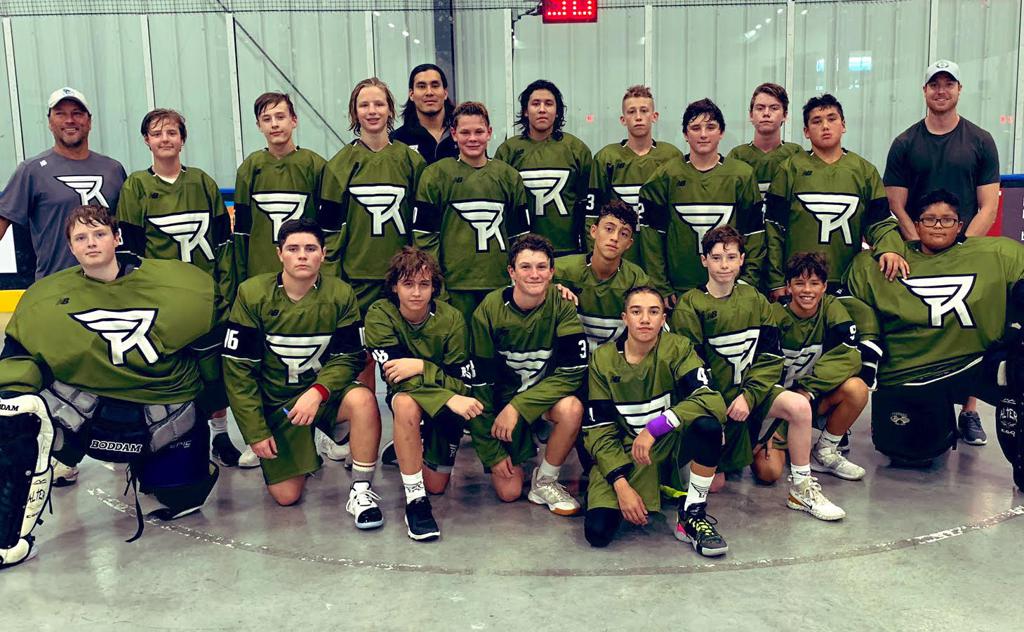 The Pee Wee team won the Red Division with a 4-0 record in round-robin action and advanced to the Finals in dramatic fashion. The Jr. Knighthawks used three goals in the final 1:21, and a penalty-shot stop by Blaine Powless, to rally past the Jr. Roughnecks, 8-7. Chace Cogan's fast-break marker with just 5.8 seconds remaining proved to be the game-winner.

Cogan finished the tournament tied for second in goals (13) and third in points (22) in the Pee Wee Division. James Holbrough, who scored on a penalty shot in the title game against versus New England, was tied for 10th in points (13).

"It was an incredible experience being able to work with the Jr. Knighthawks this past weekend," said Knighthawks player and Jr. Knighthawks coach Julian Garritano. "There are a lot of really good players who competed this weekend, and it was awesome to see the growth in American box lacrosse.

"I had an absolute blast being on the bench and getting to work with the Pee Wees. They have good character players and have been taught the right way to play box lacrosse. I have no doubt they will be a team to be reckoned with going forward."

USBOXLA placed three other teams in the semifinals, including the Jr. Bandits. At the Pee Wee age group, Buffalo posted a 2-2 record to lock up second in the Red Division. In the playoffs, the Jr. Bandits lost to the eventual champion Jr. Black Wolves to finish fourth in back-to-back years. Cooper Drennan led the Jr. Bandits with nine goals and 13 points.

In the Bantam Division, the Jr. Knighthawks ended the tourney second in the Red Division with a 4-1 record. In the semifinals, Rochester fell one goal shy of shocking the Jr. Mammoth, falling 9-8 in overtime. Trailing 6-3 at half, the Jr. Knighthawks stormed back and forced overtime on a shorthanded goal with 3:05 to play from Brett Bucktooth Jr.

The Jr. Knighthawks finished fourth in the competitive Bantam Division, with Bucktooth leading the way with 21 points. He placed third in the division in points, while Vaughn was tied for sixth (17) and Wheeler was tied for eighth (16).

At the Midget level, the Jr. Seals dominated round-robin play, finishing undefeated with a 4-0 record. They knocked off the Jr. Thunderbirds, Jr. Bandits, Jr. Knighthawks and Jr. Swarm to win the Blue Division.

The team, stocked with stars from Cali*Lax, however, was edged in the semifinals by the Jr. Roughnecks. The California club concluded the tournament with a 9-4 victory over the Jr. Swarm in the third-place game. Gage Dado led his age group with 14 goals and 23 points.

"The NLL has such a great product, and now there are American kids that dream, and more importantly, have a path to playing in it," said USBOXLA co-founder and Jr. Seals coach Shaydon Santos. "I can speak for our California players, and there's a bunch that will do anything to crack an NLL roster, including traveling to Canada for tournaments and training camps, going to USBOXLA events in the USA, attending the USBOXLA Nationals, whatever it takes.

"USBOXLA represents grassroots growth, inspiring young players, and creating a path for them to follow directly onto an NLL lineup. Very happy with the USBOXLA programs in attendance and their results, but we need to keep pushing." 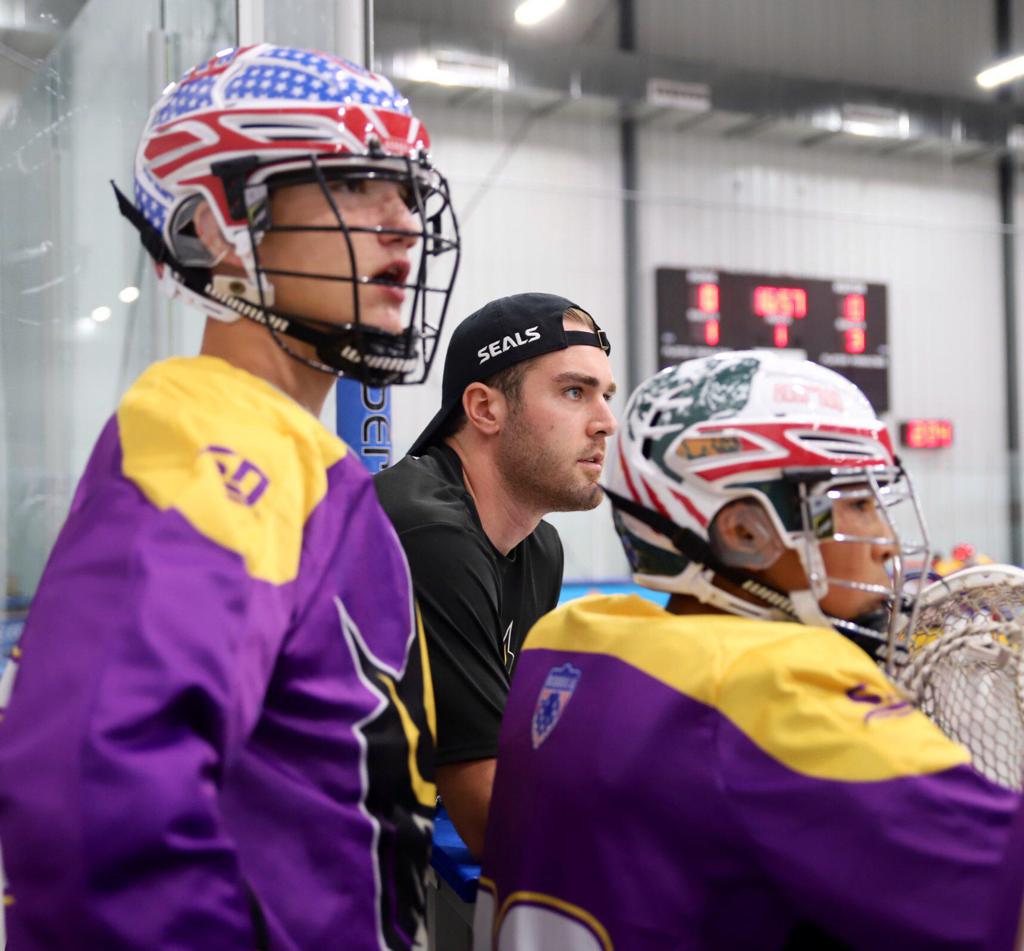