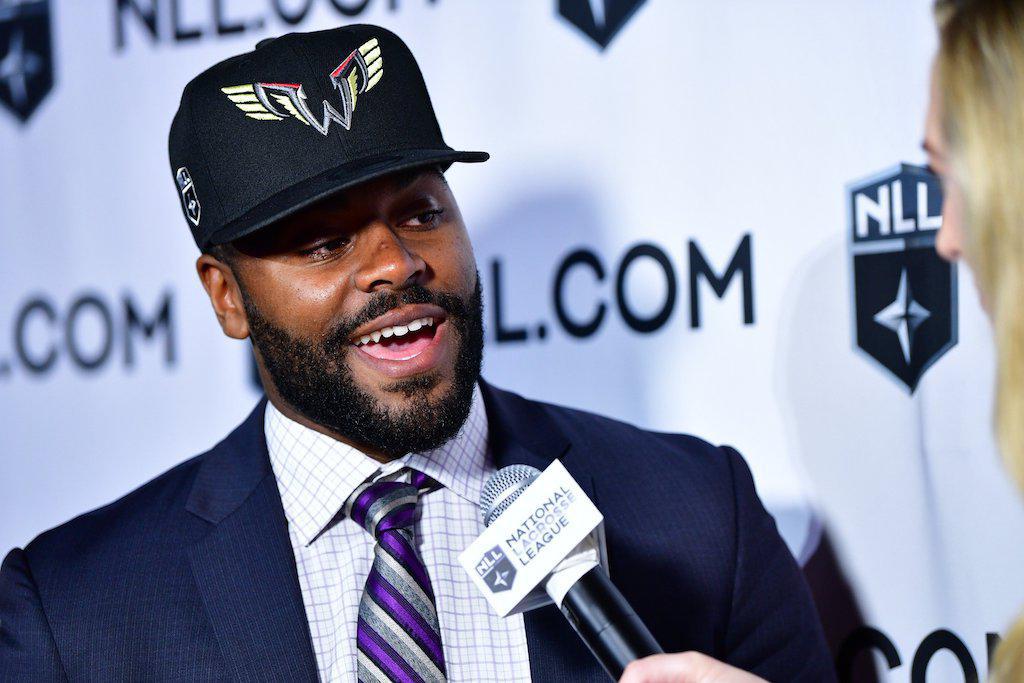 When Bryan Hancock signed with the San Diego Seals earlier this National Lacrosse League offseason, it was the second time in as many years that a player from the National Collegiate Box Series inked a deal in the box big leagues.

The first of course was Trevor Baptiste, who previous to being drafted 14th overall by the Philadelphia Wings and months later landing a spot on the NLL’s All-Rookie Team, spent a couple of summers suiting up for the Colorado Collegiate Box Lacrosse League’s Fighting Bison – even winning a Morrow Cup during his last season in the loop.

Those summers sweating for 60 minutes straight at the Foothills Fieldhouse in Denver definitely made a difference.

“Playing in the NCBS really prepared me for the NLL,” said Baptiste, who also starred for Team USA at the World Indoor Lacrosse Championships in Langley, British Columbia this past September. “Getting to know the basics in the NCBS really put me another step ahead and prepared me a little bit more than if I was just going in the NLL without having any indoor experience.”

Hancock – and many other capable NCBS products – is hoping for (and working tirelessly towards) a similar path to the pros.

Born in Highlands Ranch, Colorado and finishing up at Hobart this past spring, Hancock grew up not only near the NLL’s Colorado Mammoth, but just as importantly, near former University of Denver Head Coach, Jamie Munro, and former Mammoth General Manager, Steve Govett, who now leads the second-year Seals as the club’s president. 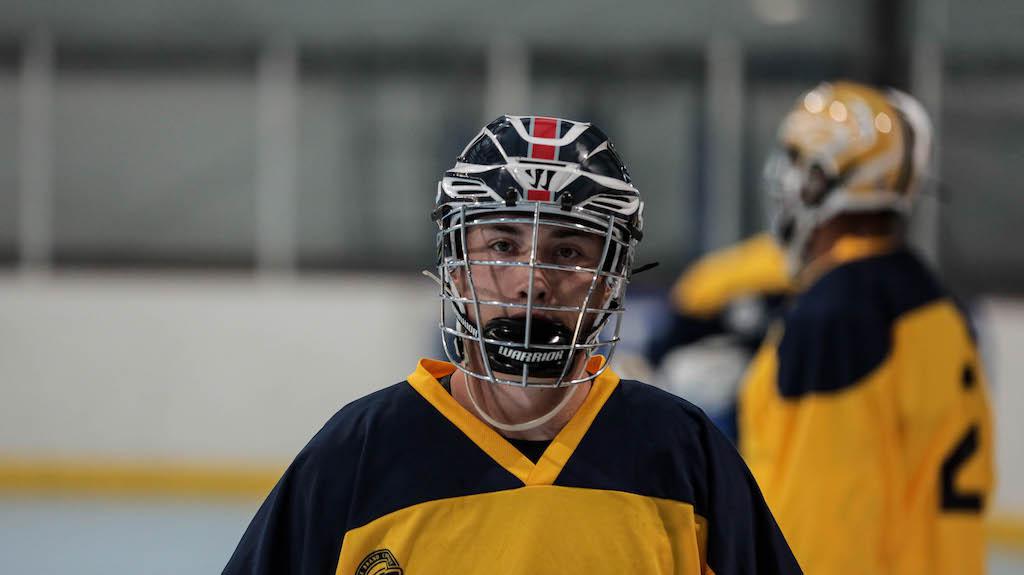 Bryan Hancock is one of the rare players that has competed in Canadian Junior and American NCBS leagues (Photo: Zach Heffner)

Munro, who also coached at Hancock’s high school, Mountain Vista, offered box training to the team, pushing Hancock to play Junior ‘B’ (and later ‘A’) lacrosse in St. Catharines, Ontario too. Govett, whose son Jake (the CCBLL MVP in 2019) was good friends with Bryan’s younger brother, rapidly recognized that Hancock could clearly play the Canadian-centric version of the game at a high level.

“I was talking to Steve and he told me he thought I had the ability to play in the NLL,” said Hancock, who after two summers in St. Catharines, would be drafted first overall by the Redhawks in the CCBLL. “It’s been a goal of mine to hopefully play in the league one day, so I was ecstatic when I got a call from the Seals.”

With training camps starting up soon enough, Hancock will find out shortly if he can do the same as Baptiste and land a prized spot on an NLL roster.

“(San Diego) Coach Pat Merrill told me to stay in shape and play as much box lacrosse as possible before camp,” said Hancock.

He'll also have an opportunity to train with former Hobart teammate and Rochester Knighthawks transition player, Frank Brown, along with other pro hopefuls in Salamanca, New York shortly. “I’m trying to do whatever I can to be as prepared as possible for camp. I’m taking it extremely seriously and feel fortunate to have this opportunity.”

The NLL’s upcoming tryouts will likely have an ever so slight spike in a specific nationality: Americans. 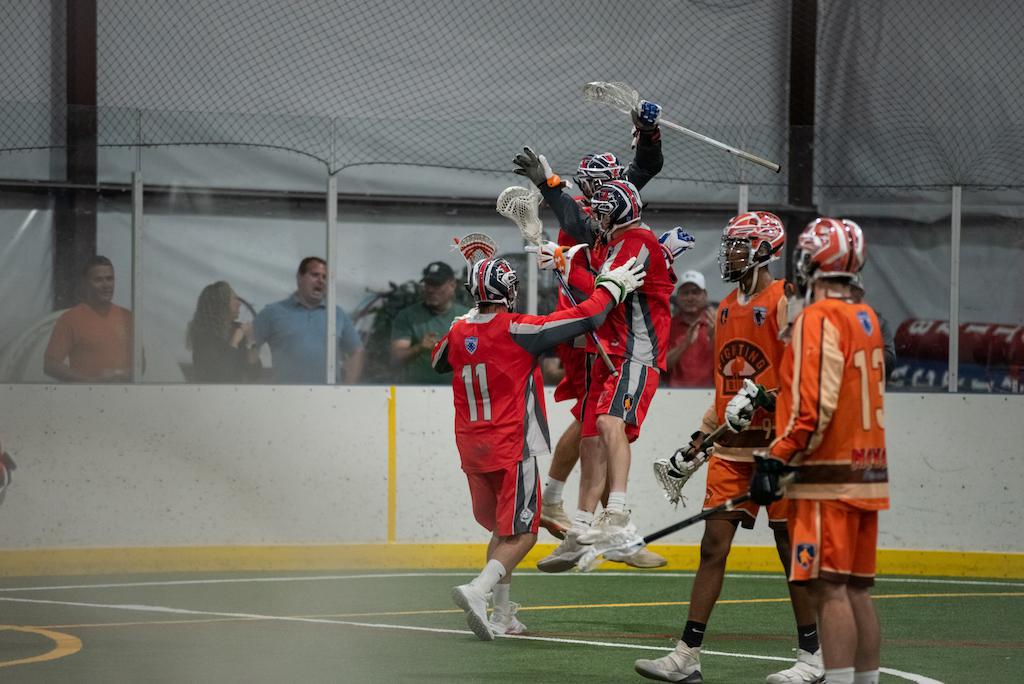 Over the past two seasons, Bryan Hancock has helped the Redhawks become an offensive force in the CCBLL (Photo: Lacey Den Hartog)

The 2019 NLL Draft saw a somewhat surprising 19 Americans selected, which oddly didn’t even include Hancock, who signed as an undrafted free agent shortly after draft day. That figure may not seem that stunning, but when you review recent draft years, you’ll realize that even just double digits would be cause for state-side celebration.

In fact, the record-setting low draft years for American players happened not too many years ago. In 2014, just three US-born players were picked. In 2015, a measly two had their name called out. And in 2016, well, we bumped back up to three (hooray!). Just eight American hopefuls drafted over three years. Depressing data to say the least.

And as uplifting as this year’s 19 are, only a select few of them have even played box lacrosse, let alone excelled at it like Hancock did in both Canada and the US.

After Canadians started crushing the NLL in the early 2000s and far fewer Americans played in the league, GMs approached the draft when selecting US-born ball players probably in a pretty similar way they did this year… by guessing.

Sure, there are skills scouts can see when watching these kids in college (on green grass fields, however, not turf or concrete pads) that could potentially translate well indoors, but until you see them actually play box lacrosse in a competitive setting, there is just no way you’ll know if they can come close to surviving at the highest level of pro lacrosse – the NLL.

If you comb through the first decade of drafts in the 2000s, you’ll see first round picks spent on elite NCAA talent like Josh Coffman, Steve Dusseau, Josh Bergey, and Ed Brown. Between the four of those former firsts, they have a combined two games played and zero points in the league. 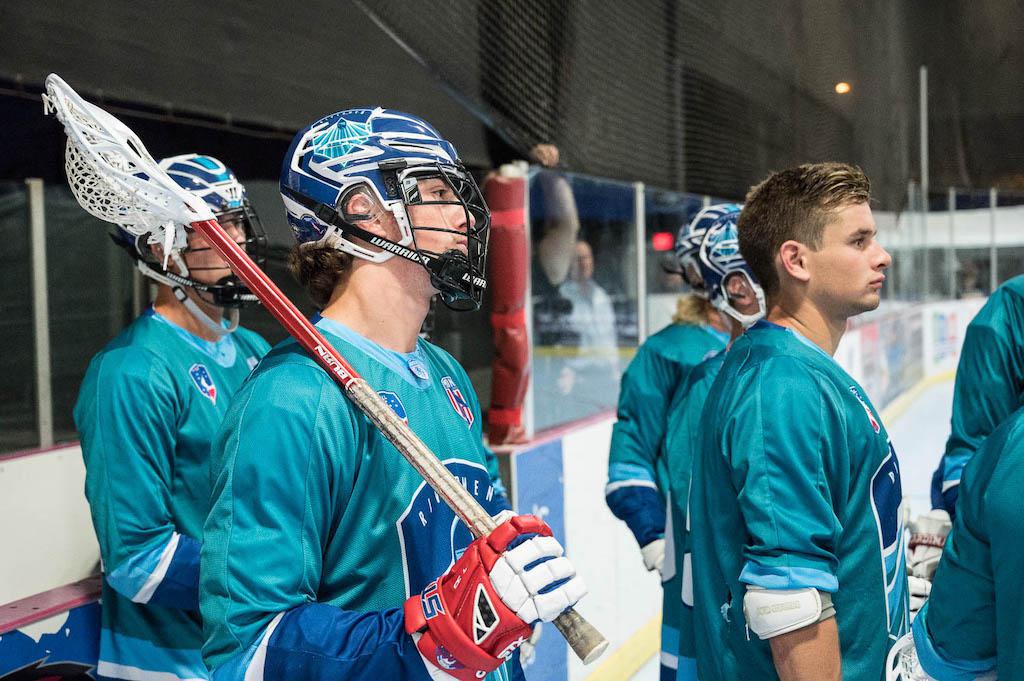 Over 200 collegiate players competed on eleven NCBS teams in 2019, including the eventual National Champion Rivermen from the OCBLL (Photo: Zach Heffner)

While many eventual great NLL American players were also drafted, even more – most of which never played a single second of box before being selected – either no-showed for camp, or never cracked a roster.

The growing low rate of Americans actually finding a spot in the NLL is unquestionably why US-born players virtually vanished from NLL scouting radars leading up to the draft. GMs were done fishing and coming up with nothing on their line. And it was hard to blame them when Canadian Junior leagues were providing, well, actual box lacrosse playing prospects, many of which now had NCAA experience as well.

If only managers and scouts in the league had a way of evaluating American-born, NCAA standouts in a competitive box lacrosse environment, all while learning the sport from former and current NLL players and coaches.

“The NCBS has been incredible,” said Toronto Rock forward Tom Schreiber, who in 2017 became the first American since 2005 (Ryan Boyle) to be voted the NLL’s Rookie of the Year. Unlike Baptiste, Hancock, and hundreds of others that have played in the NCBS’s Colorado and Ohio-based leagues (with more coming in 2020), Schreiber never had much if any box exposure.

So, can the jump from a college career spent only playing field lacrosse onto NLL turfs be successfully completed? Of course, but for every one in a million player like Tom Schreiber, there are thousands of others who found that leap far too difficult to land.

“I was lucky enough to see it firsthand out in Colorado, and I was blown away by it,” said Schreiber of his first taste of NCBS action. “To see these college players and the level they’re playing at, the competition that they have… if you’re an American-born player there’s no better place to get high-level box lacrosse instruction, exposure, and competition.” 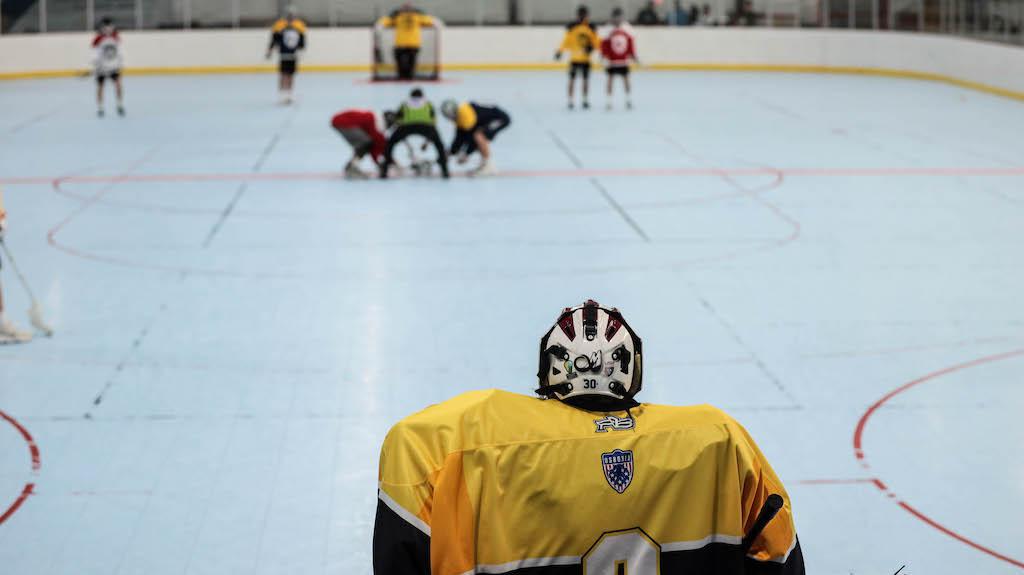 Prior to the start of the NCBS seasons, players take part in a combine, where they are evaluated by USBOXLA-certified coaches (Photo: Zach Heffner)

“The NCBS is a great opportunity because it allows you to build up different skill sets,” said the two-time Tewaarton finalist. “Just from my experience, the skills I picked up from the NCBS really transformed my game.”

Last year, eleven teams participated in the CCBLL and the Ohio Collegiate Box Lacrosse League. That’s over 200 American collegiate players competing in box lacrosse at a high level for a majority of their summer.

The NCBS also had affiliate leagues in Connecticut and Maryland in 2019, and will soon be announcing expansion plans for 2020.

“The potential for growth at the NCBS level is really exciting,” added Schreiber, who also spends time coaching US Box Lacrosse Association youth teams at different tournaments and academies throughout the year. “You see it already in Denver and Ohio, and to see that scale all over the country and recreate that Junior ‘A’ experience that Canadian players have access to, I think would be incredible … potentially even being a pipeline to the NLL.”

While Hancock was overlooked at the 2019 draft, he wasn’t the only NCBS talent that scouts seemingly let slip by them.

Playing in the inaugural OCBLL season for the Rivermen in 2018, Ohio State middie Jack Jasinski turned heads in Columbus and Cleveland that summer. This year he showed he was very much pro capable while playing for Major League Lacrosse’s Denver Outlaws.

His 7 goals in three playoff games were a big reason they Rivermen were able to clinch the first-ever Ohio Cup. Maybe even more impressive was his 8-goal performance during the regular season against the Aviators. He can score, scoop, and has had success in both field and box lacrosse. 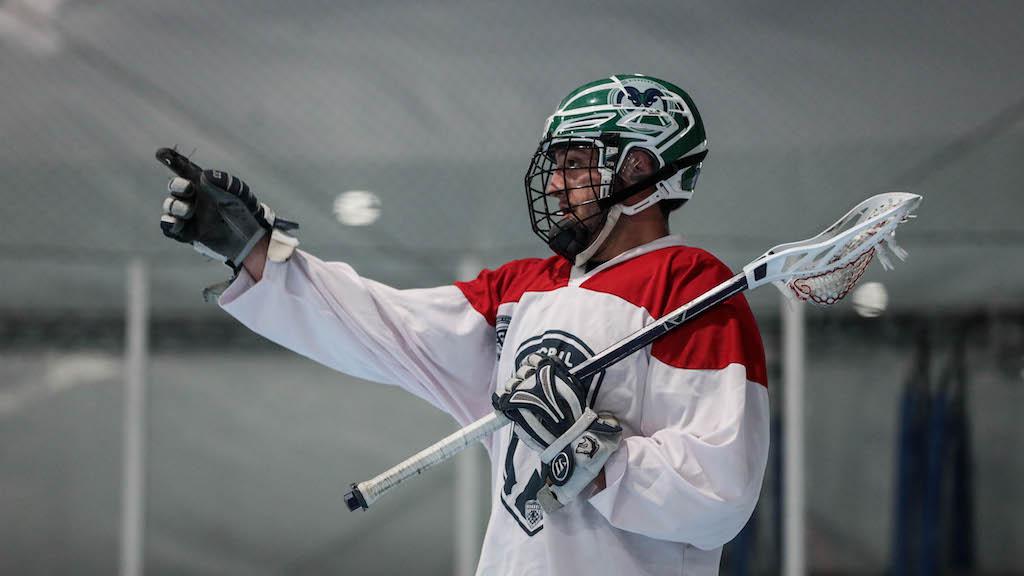 A three-year veteran of the CCBLL, no player in the NCBS has scored more goals than Anthony Ferrie (Photo: Zach Heffner)

And speaking of goals, Anthony Ferrie, who has suited up the past three seasons for the CCBLL’s Bighorns, has been one of the NCBS’s most talented and highest scoring offensive threats.

Graduating from Colorado State University – Pueblo, Ferrie has scored 103 times over three years of regular and post-season play in the CCBLL, the most of any player anywhere in the NCBS.

If NLL scouts and GMs want box-specific evidence that an American rookie can hang at a high level; Hancock, Jasinski, and Ferrie offer plenty of proof. It’s the exact proof league scouts wished they had when those fishing excursions during the draft turned up ever so empty.

“Being thrown in the box game with zero or little experience is extremely hard, especially when you’re talking about at the highest level like the NLL,” said Hancock, who experienced a similar rude awakening when he played in St. Catharines, many years before his professional tryout. “I couldn’t even imagine adapting to the NLL with zero box experience in today’s game.

“I think as these NCBS leagues grow, more NLL teams will start looking at them and realize that these kids can play. They can draft American players and not have to worry about teaching them the basics and getting them up to speed in an extremely short amount of time.”

Unlike other similar lacrosse leagues, the NCBS also allows free access to every game played through NCBS.tv. If Anthony Ferrie scored five goals in a single game (which he has, on multiple occasions), an NLL scout could simply look up his player profile, select any stat Ferrie registered that night, and watch not only that full game from start to finish, but that specific stat with isolated highlights too. A couple clicks, and you’re there.

Quite frankly, for lacrosse at any level, this stating, streaming, and scouting service available through NCBS.tv is revolutionary, and will continue to evolve as the NCBS grows.

“The fact that these guys have this opportunity now is pretty special,” said Schreiber. “I would have jumped at a chance like this when I was their age.”

Now, Americans with the same aspirations as Baptiste, Hancock, Jasinski, Ferrie, and soon to be thousands of other NCBS NLL hopefuls, will have that opportunity.

With the NLL expanding seemingly every season lately, which means more roster spots up for grabs, the NCBS hopes to turn that 19 American draft tally into more like 90 not too long from now.

So was launching an American-based, college-aged box lacrosse circuit, yet here we are today.