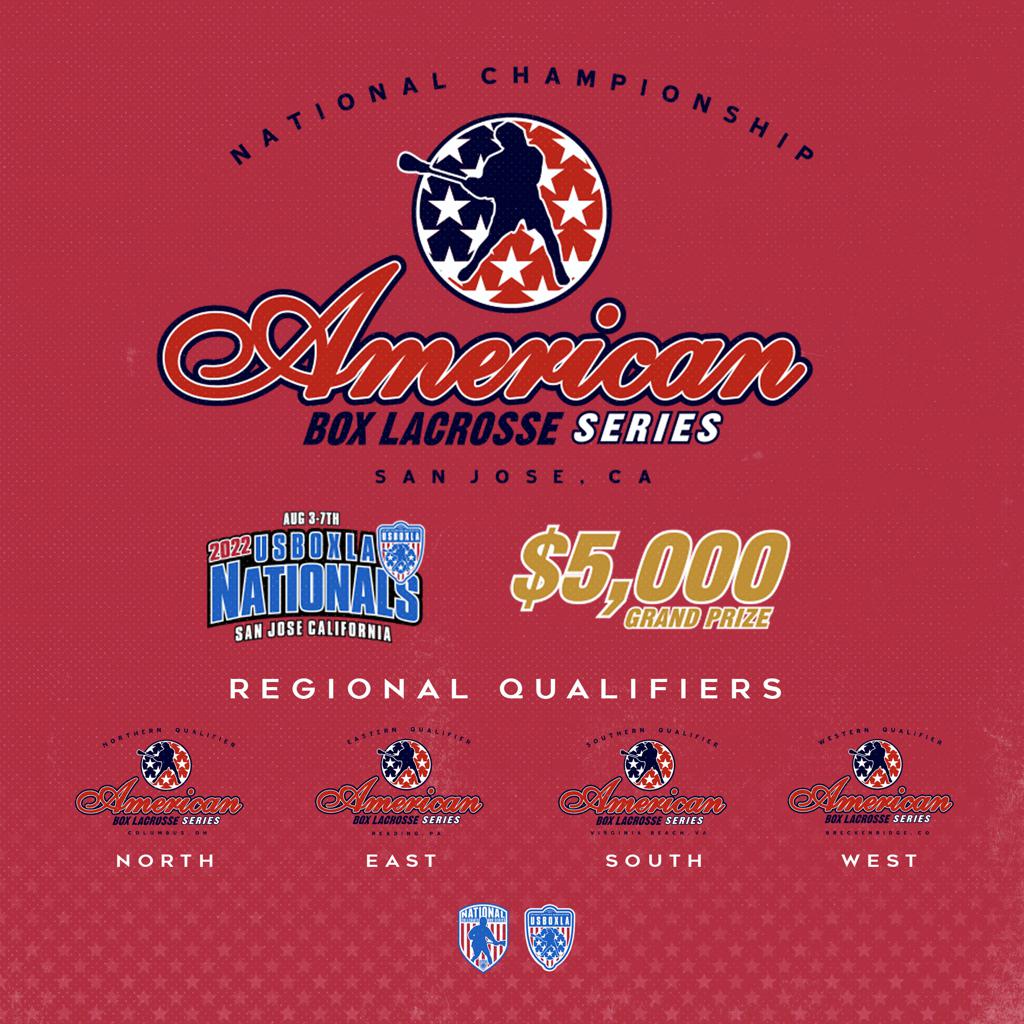 The US Box Lacrosse Association (USBOXLA) is proud to launch the American Box Lacrosse Series as USBOXLA expands into a new age category of organized box lacrosse in the United States.

The American Box Lacrosse Series is an adult division series of events across the country that crowns one team as a National Champion with a grand prize of $5,000.

The American Box Lacrosse Series Championships take place during the USBOXLA Nationals in San Jose, California making the biggest and most competitive box lacrosse event in America even bigger.

The USBOXLA Nationals expands to a 5 day event that already houses the National Collegiate Box Series (NCBS) Championship where collegiate league champions from Colorado, Ohio, Upstate New York, Connecticut and California battle it out for the NCBS National Championship.  The youth event has 130+ box lacrosse teams with age groups from Novice to HS Elite and teams from USA, Canada and First Nations attending.

"The USBOXLA Nationals is already electric, the 2021 NCBS National Championships was one of the most significant events in the game and we want more people to have these great experiences regardless of age or sex.  If you're a 10 year boy, a 14 year old girl, an elite NCAA player, or a 32 year old post collegiate player we want you to get excited for this game" says Matt Brown USBOXLA co-founder, Team Canada Coach and University of Denver Associate Head Coach.

There are 4 regional summer qualifiers in the American Box Lacrosse Series happening across the United States.  Teams who medal (gold, silver or bronze) are eligible to enter the PRO division at the American Box Lacrosse Series Championship where the winner will be awarded a $5,000 cash prize.  For teams that simply want to play or do not qualify for the PRO level there is the ADULT skill level perfect for skilled and safe games.

"There's a few levels of play in the USA, you've got the seasoned vets and a new emerging market of post collegiate field players getting involved in box.  Our goal with the regional qualifiers is to split the market into 2 distinct groups so teams who travel to California can compete in a tournament against equally skilled teams.  Both divisions will crown a champion.

USBOXLA Men's director Justin Kitashima who also runs one of the longest and most successful adult leagues in the nation, the Colorado Indoor Lacrosse League, is equally excited for what the American Box Lacrosse Series represents.

"We run a great league out here in Colorado and our teams want to move on from league play and see who the best is. Playing for $5,000 makes this real and will no doubt get our players excited."   says Kitashima who is also the NCBS Head Official and a 5 year NLL referee.

American Box Lacrosse Series will play under the NCBS Rule and Situational Book which is NLL based with minor changes dealing with game and player safety.