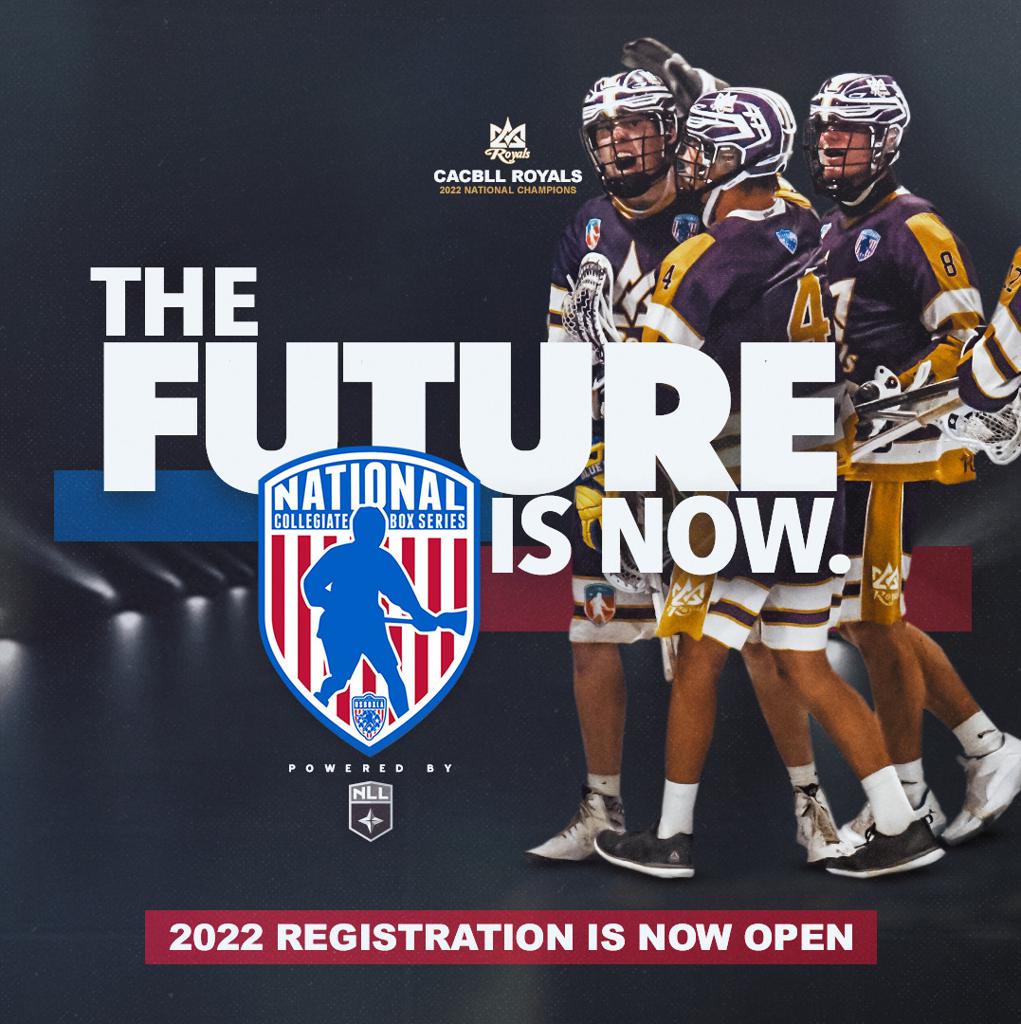 The US Box Lacrosse Association (USBOXLA) is proud to announce the opening of the National Collegiate Box Series (NCBS) player pool ahead of the upcoming 2022 NCBS season.

The NCBS was established in 2018 with the Colorado Collegiate Box Lacrosse League (CCBLL) and has expanded rapidly to include California (CACBLL), Connecticut (CTCBLL), Ohio (OCBLL) and Upstate New York (UCBLL). The highly skilled series provides American collegiate players an opportunity to improve their overall lacrosse skill set through box lacrosse, to compete for a national championship, and increase their chances of one day playing in the National Lacrosse League (NLL).

The 2022 season will see the addition of the Mid Atlantic Collegiate Box League (MACBLL) taking place in Philadelphia, Baltimore region and New Jersey allowing more elite level collegiate players on the East Coast an opportunity to grow their box lacrosse skill set and join the nearly 600 other NCAA and MCLA players who took part in the 2021 NCBS season.

Each of the six NCBS leagues will crown a champion who will then travel to California to compete for the NCBS National Championship taking place at the USBOXLA Nationals. The USBOXLA Nationals is the largest and most competitive youth box lacrosse tournament in the United States.

“We are experiencing unprecedented growth in this event at the youth level and are expanding our capacity to host 150 teams this summer in San Jose, California.  Youth teams want to know who the best programs are, players want to know where they stand among the game's best, up and coming programs want to experience the game at the highest standards.  Having the NCBS National Championship take place during the USBOXLA Nationals will showcase the top NCAA players to youth players and families in the know.  These are the record breakers, these are the future PLL Top 10s, these are the NLL Stars, the next Mac O’Keefe will no doubt be here”  says USBOXLA President Shaydon Santos.

"College lacrosse players should join the NCBS. It gives players the chance to play against some of the best players in the country and learn the box lacrosse game from current and former NLL players and coaches. The details players learn in the box will transform their field game making them more dynamic and impactful on their college team" says San Diego Royals head coach Cam Holding.

“The UCBLL exceeded my expectations.  It was well organized and professional, which made it easier to focus on playing the game” says Casey McDermott (Johns Hopkins ‘24) who also plays for the Armory who lost in the NCBS National Championship finals to the San Diego Royals.

“Playing in the NCBS is a phenomenal experience and winning the championship makes it that much better,” said Royals transition player Zach Snider (Detroit Mercy ‘26). “The coaches and players around me are incredible, the experience was fantastic."

With nearly 600 players in 2021 and the addition of a sixth league, the NCBS expects over 700 NCAA and MCLA collegiate players playing high level competitive box lacrosse coached by some of the world’s best.

Players interested in submitting their names in the 2022 player pool can click this link to provide the required information. A representative from the league(s) you expressed interest in will follow up with additional information on how you can be considered for an NCBS roster this year.

Add your name to the NCBS Player Pool