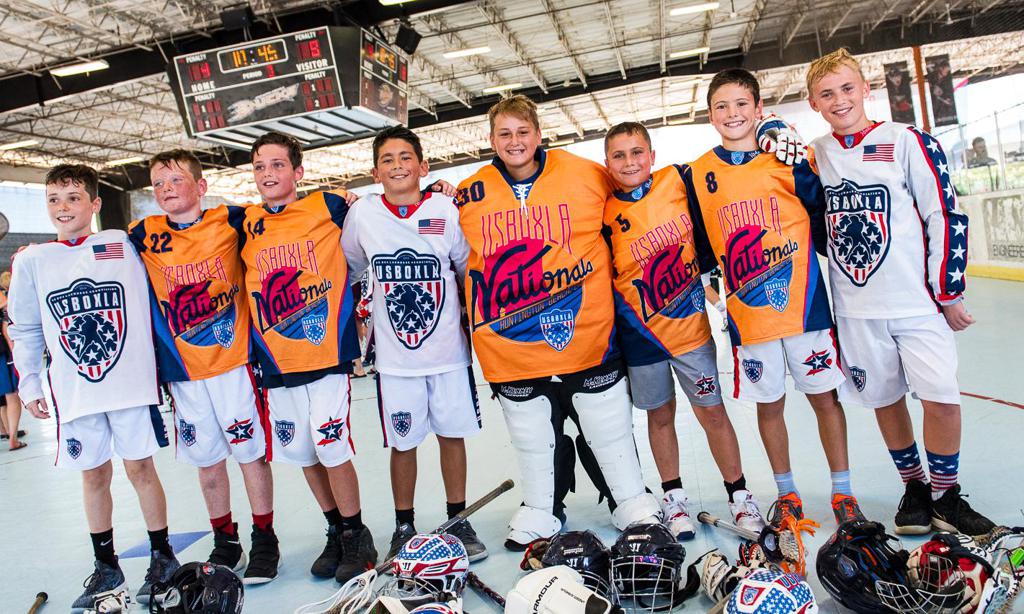 All smiles for this elite crew of players at the 2018 USBOXLA Nationals (Photo: Jason Arroyo)

(October 22, 2018)… The best is yet to come for the USBOXLA Nationals. The country’s biggest and most competitive youth box lacrosse tournament is poised to welcome more athletes and more teams than ever before.

The upcoming USBOXLA Nationals will feature 120 teams and over 1,800 players at The Rinks in both Huntington Beach and Irvine, Calif., from Aug. 2-4. Box lacrosse’s ultimate showcase also includes the pre-tournament USBOXLA Academy clinic and a new game-changing format for the tournament's All-Star games.

“Every year we’ve done Nationals, it felt like it was just our little secret,” said USBOXLA co-founder Shaydon Santos. “This past year was different. The amount of teams, the addition of more great coaches, the skill of the players, the quality of officiating, the excitement in the stands and the great venue all made it feel like the sport had arrived in a big way. Now, nothing can stop it.”

Since founding the tournament in 2004, along with the University of Denver and Team Canada's Matt Brown, the roster of teams and participants has grown exponentially. In 2019, teams from Arizona, California, Colorado, Connecticut, Georgia, Minnesota, Nevada, New York, South Carolina, Tennessee, Texas, Utah, and Washington, are expected to compete against their Canadian counterparts from British Columbia, Alberta, Manitoba, and Ontario.

“We have been growing and uniting people who have a passion for the game and who have a passion for giving back to the sport,” said Santos. “We’re just connecting the dots and building safety and structure to box lacrosse. The USBOXLA Nationals are the showcase, the focus of training in the United States. Gone are the days of ‘keeping a stick in your hand in the offseason.’ Now, players are training and playing box with a purpose, and that purpose is to be a champion at the USBOXLA Nationals!”

For three days, the most competitive and well-coached box lacrosse programs in the United States and Canada will descend on the tournament to play safe, sanctioned, and successful box lacrosse.

The USBOXLA Nationals faces off Friday morning at 8:00 a.m. (PDT) as the boys and girls begin their journeys through three action-packed days of box lacrosse. Once again, the tournament features five boys’ divisions, while the girls – who played in their inaugural event in 2017 – will compete at the Bantam and Midget levels.

The addition of the girls’ division has Santos and company excited about the future of the box game and the continued growth of the USBOXLA Nationals.

“Girls across the U.S. are doing pretty much the same thing that boys were eight years ago,” said Santos. “They are playing a version of the game, but not actually playing it. We'll continue to use the USBOXLA Nationals as a way to set the standard for girl's gameplay in the U.S. There's a lot of people offering box training across the country, but now we give an outlet for that training in a safe and structured format. Doing some drills is great but playing and competing in the sport is what it's all about."

The USBOXLA Nationals in 2019 will also feature a 'C' level, perfect for teams looking to get their feet wet and build future positive experiences for their program and box training.

Registration is officially open. The event will sell out. Become a Champion!

To register and for more information on the 2019 USBOXLA Nationals, please go to www.usboxla.com/nationals.