Be a Champion Spotlight: Roy Colsey 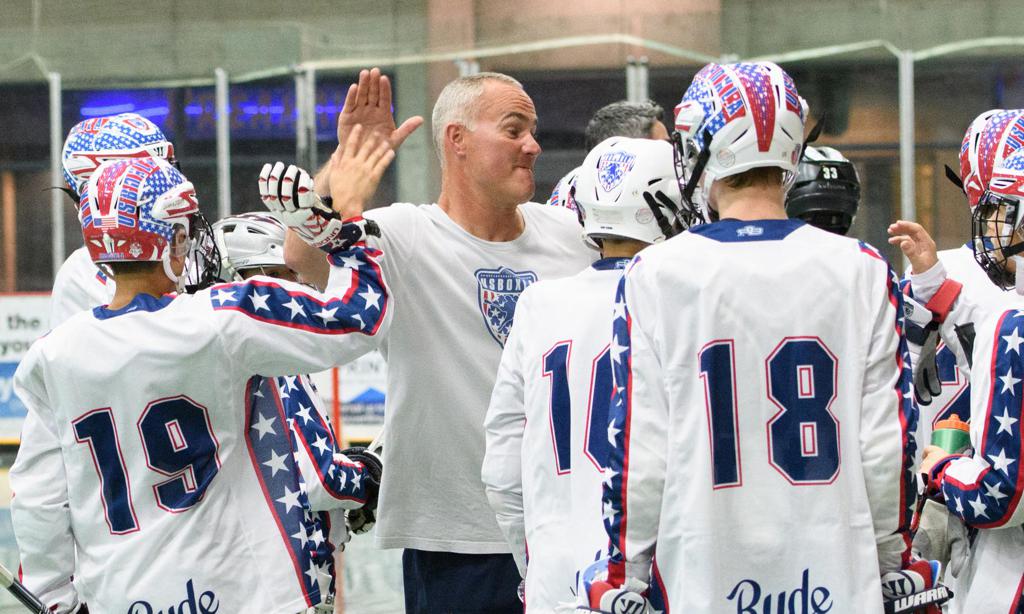 “Being a Champion” is the motto of the USBOXLA Nationals, but it could very well describe the playing and coaching career of Roy Colsey. At every stage of his life, the Yorktown Heights, N.Y., native has been a winner.

At Syracuse University, he was a four-time All-American and a two-time NCAA champion. In the professional field game, he won three titles in eight seasons in Major League Lacrosse. In 2006, he was named to the U.S. Men’s National Team and six years later was inducted into the National Lacrosse Hall of Fame. For most people, that would be enough to solidify yourself as one of the great players ever. But, for Colsey, that’s only half of his story.

His first venture into professional lacrosse was in October of 1995 at Rochester Knighthawks tryouts. That was when he was first introduced to box lacrosse. It was an intense day of double sessions in the old Culver Road Armory in Rochester, N.Y. The athletic college midfielder learned on the fly as he was matched up against seasoned box players, who were also fighting for one of the 23 roster spots. At the end of four days of tryouts, Colsey was one of six rookies who made the team. He joined a franchise that was rich in future Hall Famers, playing alongside the likes of Paul Gait, Jeremy Hollenbeck, Randy Mearns, Regy Thorpe, and Tim Soudan.

For Colsey, the 1996 season launched a decade-long career and eventually earned him the distinction as USBOXLA’s ninth-best American-born player in NLL history. The Knighthawks’ former second-round pick went on to play nine more seasons in the National Lacrosse League, making stops with the New York Saints, New York Titans, New Jersey/Anaheim Storm and Buffalo Bandits. He established himself as a physical and gritty player with an absolute rocket from the outside. When he retired at the end of the 2007 season, he left with 394 points and a pair of All-Pro selections. In 2002, he also contributed to Team USA’s upset win over Team Canada in the Heritage Cup.

Colsey admitted it was that inaugural season with the Knighthawks that shaped his box playing and coaching career.

“The first time I ever played box lacrosse was at the Rochester Knighthawks tryouts,” he said. “I tell people that I think one reason I learned to teach the game is that I was so bad when I first started playing. I didn’t understand the picking; I was horrible at shooting. I had great athleticism, and that was the only thing I brought to the table as a player in box.”

Luckily for the National Lacrosse League and youth lacrosse players in New York and New England, Colsey stuck it out and used that first box experience as motivation. He now uses the lessons he learned in the box to teach his kids the proper way to play the game. Over the past decade, the players at Ridgefield (Conn.) High School have benefited from his field and box lacrosse background. It was just one season ago that Colsey guided the Tigers to a Class L State Championship. Ridgefield’s 9-8 victory over top-ranked Darien made national news as the Tigers ended the Blue Wave’s 76-game winning streak.

Colsey has also achieved similar success with his box program. As the founder of Team Superstar in Ridgefield, Conn., he has established an elite program in the foothills of the Berkshire Mountains. His venture into the box lacrosse market began innocently enough, as he took his field players to a nearby USBOXLA-sanctioned tournament.

“I saw that USBOXLA had sanctioned a couple of programs in the area, one of them being Fusion, which is down in the Philadelphia area,” said Colsey. “We went to one of their tournaments and the kids I brought down just absolutely loved it. They loved the game; they loved the pace.

“When we came home from that tournament, every kid wanted to play more. I recognized it was more than just fun; it was bringing back a lot of passion and a lot of excitement to the kids. That’s what got me going. Seeing how much they loved it was very powerful.”

Since Team Superstar’s inception in 2016, Colsey has seen tremendous growth in his players, who are dedicated to learning the fundamentals of box lacrosse. In 2017, Team Superstar officially joined USBOXLA, and in June, seven players competed in the prestigious Trevor Wingrove Tournament in Coquitlam, B.C. Colsey was also selected to coach the U.S. National Bantam Team. This past year, Team Superstar took the USBOXLA Nationals by storm as it finished second in the Pee Wee Division and captured the Bantam A championship.

“They have played a lot of box lacrosse and are committed to it, and are serious about it,” said Colsey about his Bantam team. “It’s great to see them gravitate to the game and then learn it. They play a pretty good brand of box lacrosse. It has been a lot of fun, not just for my boys but with the kids who I have been working with for a long time within my Superstar program. To see them have success is gratifying.”

Roy has three sons who are aspiring box lacrosse stars. His eldest son, Ryan, played on the Bantam team, while Kyle was a member of the Pee Wee team that was edged by the Stealth in a shootout. His youngest son, Christopher, is in fourth grade and playing for Team Superstar as well. Roy has taught his sons and his players the box game the same way he learned it in the NLL.

“So many of these guys who are teaching it are making it a hybrid,” he said. “I decided not to do that. I didn’t want to teach it as a hybrid game. I want them to learn it the authentic box lacrosse way. You are using one hand all the time, and that’s been a really big part of our success. I think we are playing the game the right way.”

With the backing of USBOXLA, Colsey has seen his Team Superstar program explode in the past six months. His tournament box team has grown from 100 to 175 kids. To keep up with the demand for superior training, Team Superstar partnered with legendary lacrosse player Oliver Marti. The British Columbia native played in three Canadian National Box Lacrosse Championships: two with the Junior “A” Richmond Outlaws and one with the well-known New Westminster Salmonbellies Senior “A” club. Marti competed collegiately with Brown University, leading the Ivy League in scoring every year and earning All-Ivy and All-American honors. He is an Ivy League champion, a member of the Brown Hall of Fame, holds several NCAA records, and currently ranks fifth all-time in NCAA history in goals per game in a career. He was also a member of Team Canada at the 1994 World Field Lacrosse Championship and played two seasons with the NLL’s New York Saints.

“Oliver’s inside scoring ability and finesse around the net complements my style of play,” said Colsey. “He brings a unique aspect to our current youth players, where fakes and scoring on a 4-by-4 net have not been a large part of their lacrosse development, at least not until now.”

Colsey and Marti are currently preparing the kids for the USBOXLA Northeast Regional Qualifier in Hatfield, Pa., hosted by Fusion Lacrosse. The weekend of Dec. 28-30, Team Superstar will send teams at the Novice, Pee Wee and Bantam levels to the tourney.

“I love the USBOXLA structure,” said Colsey. “I love what they are doing as far as growing the game. They are stressing having fun and getting better while playing this game. I love the way they are focusing on safety and making sure the rules are the same at every tournament.”

His goal is to send three to four teams to the USBOXLA Nationals in Huntington Beach and Irvine, Calif. The 2019 event will feature 120 teams and over 1,800 players from Aug. 2-4. Box lacrosse’s ultimate showcase includes the pre-tournament USBOXLA Academy clinic and All-Star games.

The 2019 USBOXLA Nationals will feature a new All-Star format with the top American players facing off against the Canadian All-Stars at the Pee Wee, Bantam and Midget levels. Two-time world champion Geoff Snider, who led his ELEV8 club to the 2018 Midget A championship, will coach all three Canadian teams. Colsey will team up with USBOXLA co-founders Shaydon Santos and Matt Brown to coach the U.S. teams.

“I am having so much fun,” said Colsey. “I want to do as much as I possibly can with USBOXLA from a coaching and training standpoint. I would do anything that Shaydon and Brownie ask me to do. I’m excited about the future of American box lacrosse, and I’m thrilled to be getting involved on the ground level.”

Starting in November, kids can train with Colsey, Marti and USBOXLA team members at the Team Superstar Box Lacrosse at Somers Sports Arena in Somers, N.Y. The 10-week program, which runs from 6:00 to 7:00 p.m., begins on Wednesday, Nov. 28 and wraps up on Wednesday, Feb. 13. Space is limited to 18 players at the third- and fourth-grade level, and at the fifth/sixth and seventh/eighth-grade levels. Players will learn fast-paced, dynamic lacrosse training that will improve their skills for the spring season. To register or for more information, go to superstarlacrosse.com.

With Colsey and Marti at the helm, Team Superstar will once again be the favorites at the USBOXLA Nationals. More importantly, kids will have the opportunity to play box lacrosse and learn to “Be a Champion.”

“We have a good group of guys who have NLL experience teaching the game to these American kids,” said Colsey. “I think the future is going to be exciting, especially for the NLL. I think we will produce more American players that can contribute.”