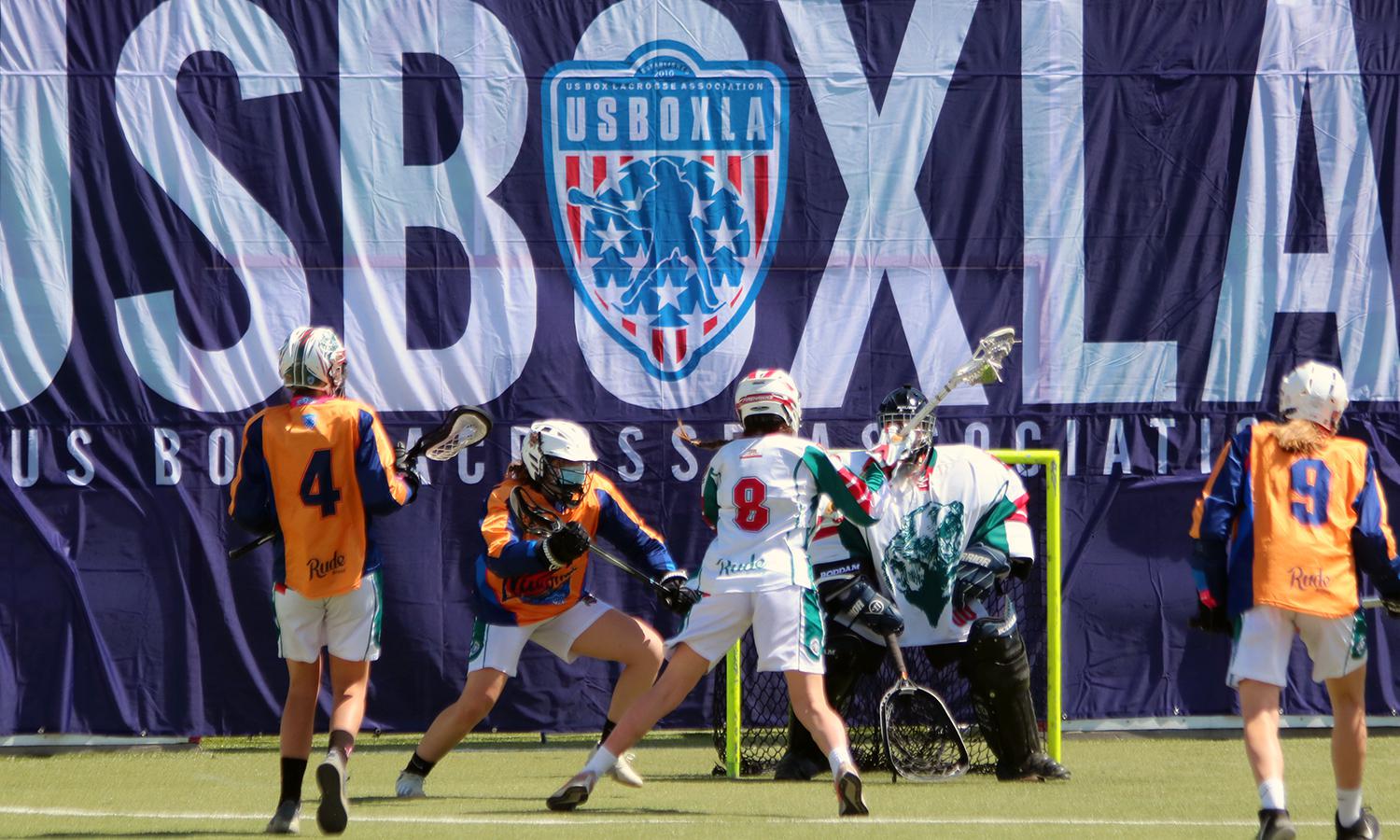 History was made in the desert in March as the US Box Lacrosse Association (USBOXLA) hosted the historic first-ever all-girls box lacrosse tournament in Glendale, Arizona. The two-day USBOXLA Western Girls Invitational was set at the outdoor rink at the Arizona Sports Complex. It was indeed lacrosse’s equivalent to baseball’s “Field of Dreams.”

"Look at the all the fun these boys are having across the country now playing and loving box, there's no excuse not to build it for girls said USBOXLA Co-founder and President Shaydon Santos. The venue was awesome. The weather was spectacular. The girls had an amazing time playing in a safe, structured and skilled environment of USBOXLA."

“It was really awesome meeting these girls because they are all super nice, from places like Minnesota and Southern California,” said Siena Wong, who played in the high school division with Cali*Lax ALL-STARS. “It’s not just the playing, it’s meeting the other teams, which I really enjoyed. It was (also) really fun playing outdoors.”

“I had a lot of fun. Part of it, I really like how physical we can be,” said added. “There’s a lot less rules holding us back. It’s just super fast and aggressive. I think that’s going to make me a great player in field.”

Siena was accompanied on the trip by her dad, Dr. Glenn Wong, who has witnessed his daughter's passion for lacrosse transfer from the field game to the box game in five short years. The trip to Arizona was another father-daughter bonding experience. It was also an opportunity to be part of history.

“We were new to box and a bit apprehensive at first for my daughter to play box but it's so impressive how much these girls grow and how much they love playing it.  I think for what Shaydon was able to accomplish, pulling players from all over the country to put this together, was a good experience for the girls,” said Dr. Glenn Wong. 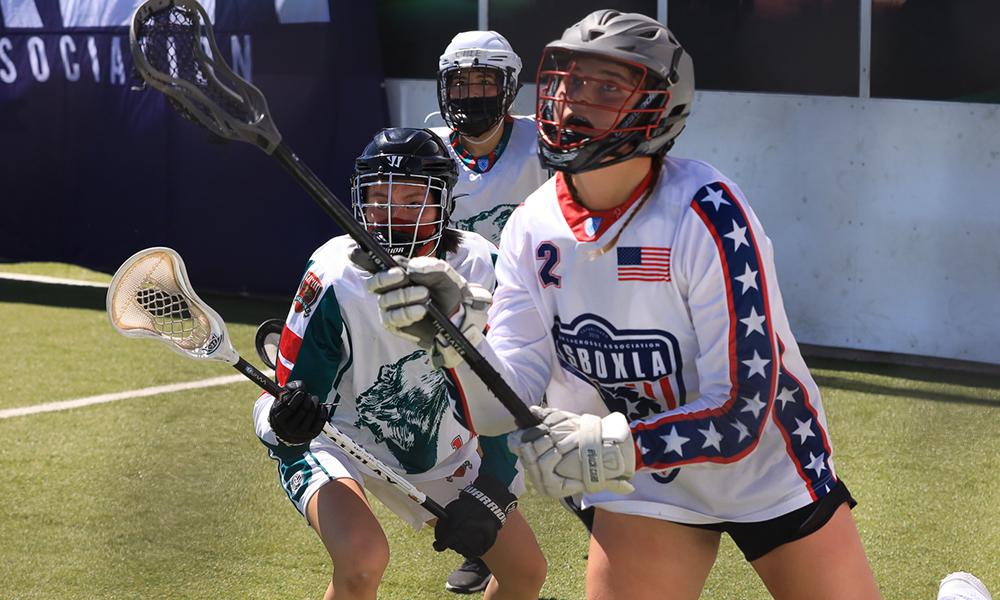 The tournament and the girls’ box game's growth has taken a similar path as the boys’ game. The US Box Lacrosse Association's creation took root from a conversation and friendly competition between teams from California and Denver in San Jose. Founded in 2010 by current University of Denver Associate Head Coach and Team Canada Coach Matt Brown, and former National Lacrosse League player Shaydon Santos, USBOXLA has grown from a small regional association to one that presently serves over 25,000 members.

More than a decade later, the girls’ game follows a similar roadmap in its growth. With an increased interest in box lacrosse, it was time for USBOXLA to host a girls’ only tournament.

“We are making history having our first female tournament in the States and it’s just about to get bigger,” said Kelsey Cuje, who coached a California team. “I can’t wait to break glass ceilings too, because the girls want to hit. They want that contact, and they’re ready to go.”

Cuje caught the box lacrosse bug following her sophomore season of field lacrosse at Division I Rutgers University. Looking for a way to improve her game and confidence, she traveled to Toronto and spent a summer playing in a women’s box lacrosse league. It was the best decision of her life. Now she is doing all she can to spread the game to girls around the US. 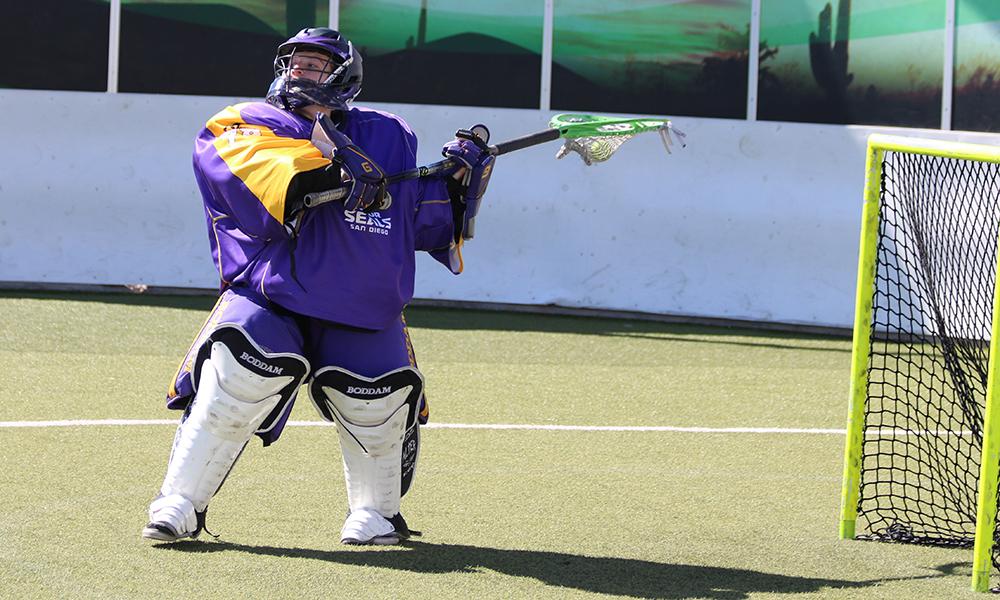 Under the direction of Kelsey Cuje the NLL's Jr Seals now have a girls box program (Photo:Tonja Deegan)

Cuje, who now runs the Jr. Seals girls box program in San Diego, had a serendipitous introduction to USBOXLA and Santos. It was during a jog through the streets of Irving, Calif., that brought her face-to-face with the future of the box game in the United States. That chance encounter jumpstarted the girls’ movement as Cuje has poured her passion into sharing the box game with girls around the country.

“Lucky for me I connected with die-hard former NLL Canadian box dads who have daughters,” said Cuje. “I introduced myself to Shaydon Santos in Irvine, Calif., when I was going for a run... and literally ran into the USBOXLA Nationals tournament. That interaction happened two years ago. After collaborating and staying optimistic through COVID, Shaydon and myself bit the bullet and put something memorable together. We said, ‘This just has to happen!’ Even if it is small, we believe we will get enough girls, and we are going to make this happen.”

It was a race against time and social norms as Santos and Cuje, and a cadre of lacrosse coaches, players and supporters, sent calls, texts and emails across the United States to cobble together the first American box tournament of its kind.

“We invited the Minnesota Stars and reached out to contacts who had girls who have played with boys’ teams who were eager to play,” said Cuje. “We knew there was going to be push back with how quickly we set up the tournament, some people not ever playing the sport, and getting the right equipment. But through neighbors, high school donations, and USBOXLA donations, we were able to come together and have an epic weekend. I have never seen the girls grow in one weekend while having a complete blast.”

The coaches who were instrumental in organizing girls to play in the event were Chris Lauretani (Team Superstar), Ben Prepchuk (Arizona Outlaws Lacrosse) and Tim Jones (Arizona Girls Lacrosse Association). Lauretani brought four players with him from Connecticut to play in the 7th-8th grade division. 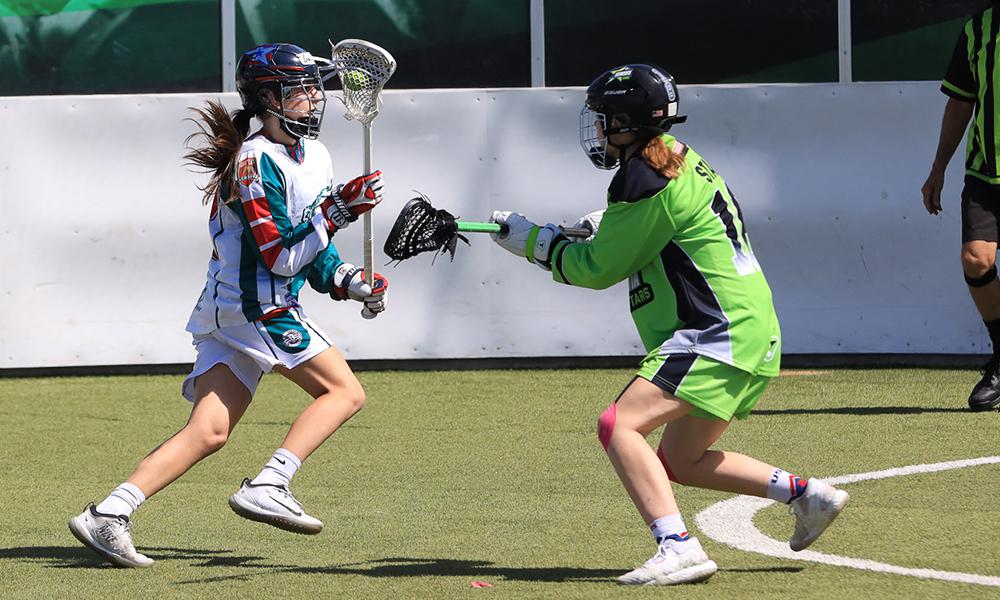 Aime Caines went one step further and brought out the Minnesota Lady Stars box program, which he launched in 2018. With a huge commitment to its girls’ program and after a long layoff because of COVID, it was a no-brainer to attend the event in Arizona.

“It was awesome. It was a great venue, and we had really good weather,” said Caines, who serves as the Director of Player Development and Coaching for True Lacrosse Minnesota. “It was just a really good experience for us because we hadn’t played a game in a couple of years with the USBOXLA Nationals being canceled last year.”

Although a bit cliché, the tournament was not about wins and losses; it was a family-friendly event, held in an amazing outdoor location. The setting was so pristine that the participants dubbed the event “Sunsets and Shootouts” on Day One. The opening day's highlight was the KILL’R Shootouts at each level, which showcased stick skills and incredible lunging saves.

It gave standout players a chance to shine brightly in the desert sun. Goalie Angela “Cheeto” Price was phenomenal in goal. The Long Island native, who played up in the high school division, has been compared to Rachel Vallarelli, who had a tryout with the New York Riptide in 2019. The eighth grader currently trains virtually with USBOXLA coach and National Lacrosse League Hall of Fame goalie Dallas Eliuk.

Her sister Annabelle, known as “Chicken” Price, showed off her box lacrosse skills, which she has been perfecting for years against the boys. The event also attracted Sawyer Billings and her mom, Kelly, from Denver. Sawyer competed in the high school division and was among the top players in her age group. It’s safe to say that the Western Girls Invitational featured the future stars of the game.

“We were showing the world this can be done by leading by example,” said Cuje. “This was the first all-female box lacrosse tournament in the US and an amazing success."

“The feedback from the parents said it all. They didn’t want to watch at first, and then five minutes later, I hear, ‘Get her.’ They were getting into the game of lacrosse more than I have ever seen. It's just a different culture. The box is intimate, intense and exciting.”

Next up for the girls’ teams is the San Diego Seals Summer Shootout. The two-day event, which will feature boys’ and girls’ competition, is slated for Saturday, July 31 to Sunday, August 1.

The event in San Diego is a warmup for the biggest and most competitive box lacrosse tournament in American history, the USBOXLA Nationals, which will be held in San Jose, Calif., from Friday, Aug. 6 to Sunday, Aug. 8, this will be the 4th year having a girls division in the USBOXLA Nationals that attracts teams from both Canada and the USA. 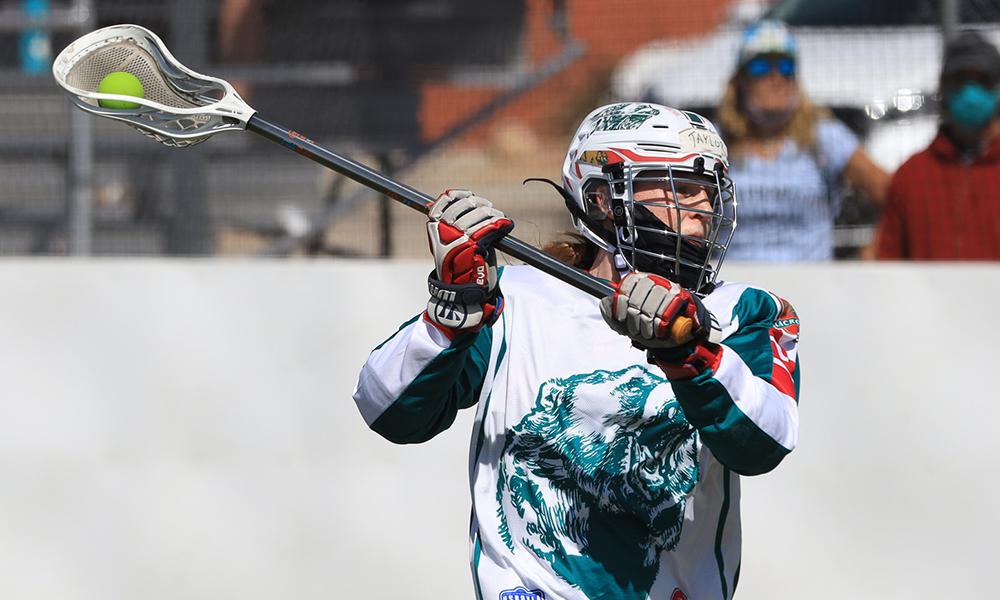 The recommended stick for girls is the Warrior Warp which is great straight off the shelf (Photo: Zack Heffner) 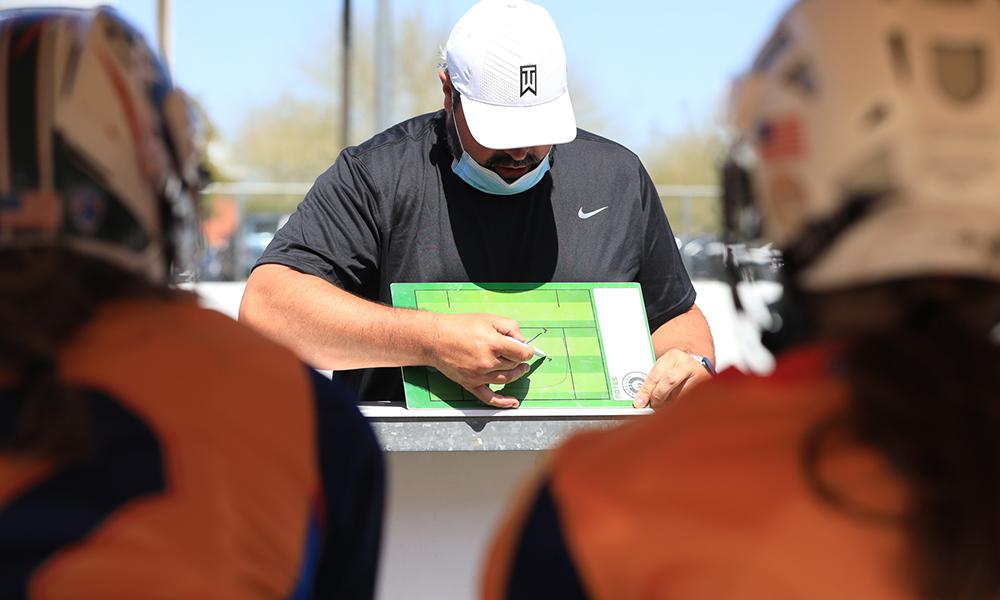 It's just Box Lacrosse, there are no boys or girls rules. World, Minto, Mann and Presidents Cup Champion Ben Prepchuck with the x's and o's (Photo: Zach Heffner)